It’s now two months since my return from China, and how proud my mother would have been that I went there on my own. I thought of her so much, and her obsession with Chinese culture and communism – I wonder what she would have thought of the changes that have come to China, and which it has brought to the world, in the forty years since her death.

I went because I was invited to Shanghai to visit as Author in Residence at the Concordia International School, and after nearly a year of planning with librarian Jennifer Chapman, we finally managed to make it happen. We had two or three discussions and workshops every day for a week, as well as sitting in on the students’ after school writing club, where it was a real challenge for me to have to produce some flash fiction (my latest work-in-progress being over 100,000 words at the moment…). We talked about anime and inspiration and writer’s block and Buck Rogers, and we took selfies. My idea of a good time!

I loved the chance to talk to these talented and multilingual readers – mostly Chinese, but all speaking fluent American-accented English. The adult educators casually tossed around a term coined in the 1950s but which was never applied to me while I was growing up: TCK, or Third Culture Kid.

The BBC calls them “citizens of everywhere and nowhere.” Wikipedia defines them as “people raised in a culture other than their parents’ or the culture of the country named on their passport (where they are legally considered native) for a significant part of their early development years.” Not only does this define ME (I spoke fluent Jamaican patois when I was eight), but it applies to my own Scottish-raised British/American children with their mid-Atlantic accents. And – revelation! – it is the single trait shared by almost all my fictional characters, from Telemakos to Julie to Rose to Em and Teo. So that was a surprising and wonderful connection I was able to make with a group of young people I didn’t expect to have anything in common with.

But of course there was plenty to connect with, because we are all writers and readers engaged with the world. (Most unexpected question from a Chinese 7th grader: “What is your opinion on Brexit?”) I visited with 6th, 7th, 8th, 9th, and 10th graders in English and Humanities. We talked a LOT about Ravensbrück, as the students were getting ready to do projects on the Holocaust. I loved how interested, appreciative and attentive everybody was as I showed off my World War II artefacts and encouraged people to make up stories about them. At one point, when the students seemed to be chattering during a period when they were supposed to be doing individual writing projects, it turned out that they were helping each other with their English spelling.

I borrowed a bicycle from my hotel and rode to the school and back each day. I had a foot massage in a local massage parlour, and was treated to a meal out in the Former French Concession neighbourhood by Jennifer and the Concordia library staff. On the way home in the dark, the huge city was alight – the futuristic towers of Pudong glowed and sparkled with changing colours like fireworks. 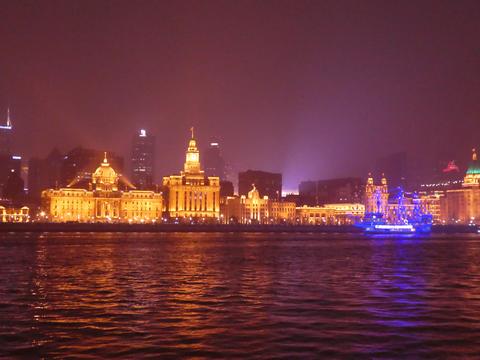 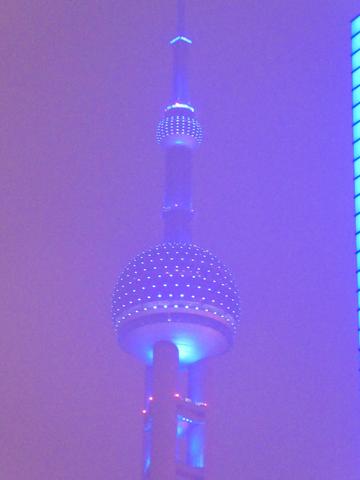 I also fit in a visit to the Aurora Museum, full of two thousand years’ worth of blue-and-white porcelain and jade, and a trip to a posh supermarket – the Chinese equivalent of Waitrose, perhaps? I bought noodles and tea and a lot of mysterious snack food, most of which I couldn’t tell from the wrapper whether it was candy or beef jerky. I bought some stuff just because it was so pretty. 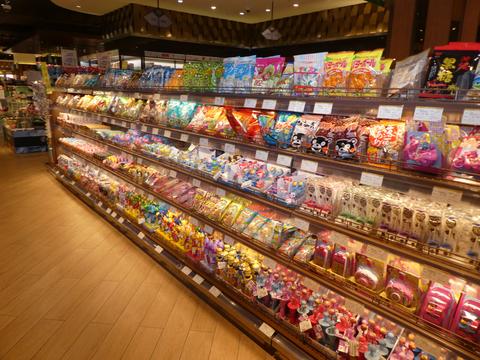 The highlight of my time as a tourist in Shanghai was wandering around the Bund and the Old Town on my own – amazed by the variety of life as people hung washing on telephone wires, set up impromptu barber shops on the street, visited with friends. 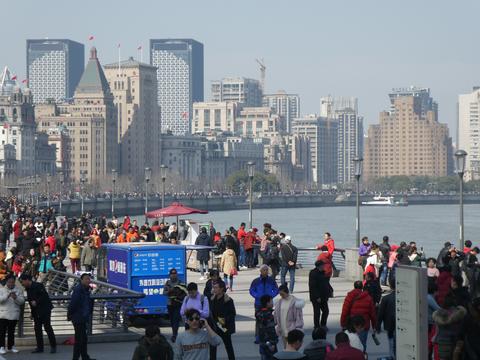 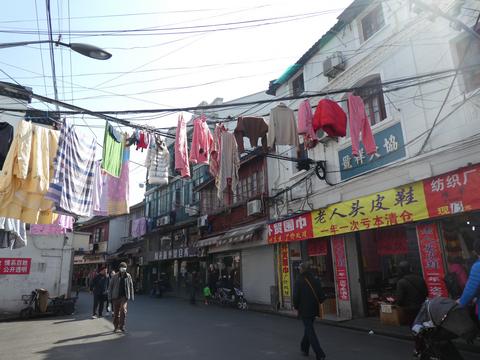 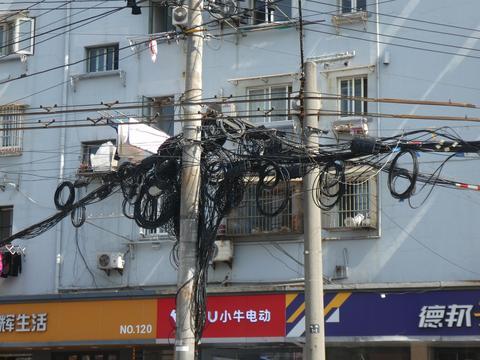 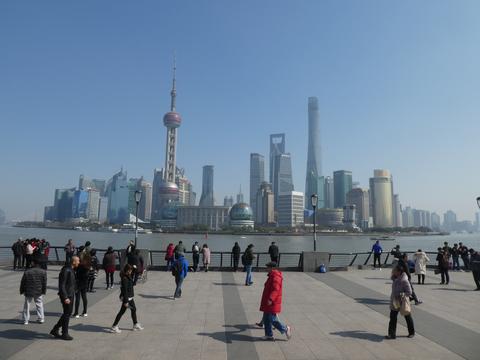 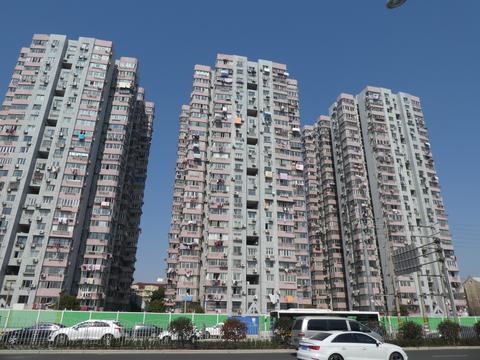 I found my way into the Yu Yuan Gardens, hidden behind high walls in the middle of a furiously busy shopping district – five hundred years old and focused on Feng Shui, meaning wind and water. 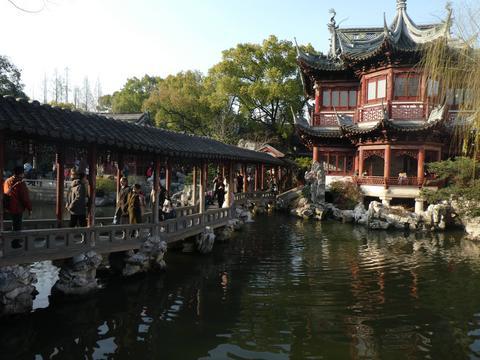 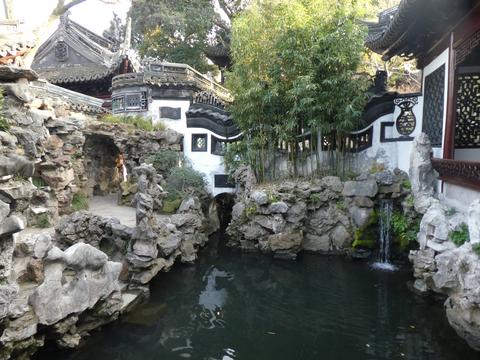 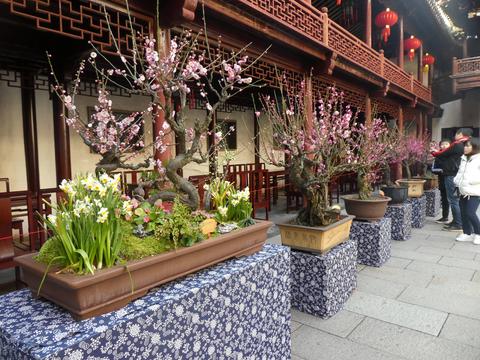 Pagoda after pagoda, rocky little stairways and waterfalls, covered wooden bridges and stone bridges (zigzagged because evil spirits travel in straight lines), huge koi in all the pools, tiny banzai cherry trees blossoming everywhere, birds singing in the mature trees, secret nooks and crannies, benches, mirrors, windows, and a grove of “metasequoias” or “dawn redwood” trees, deciduous conifers which date to 60 million years ago and were thought to be extinct until someone found one growing obscurely in 1941. 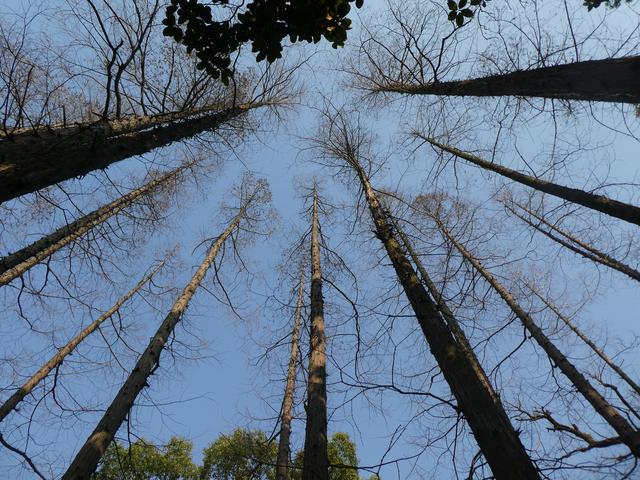 Every time I thought I’d finished I’d go through another tunnel or archway or staircase or bridge and there would be a whole new section of the garden that I hadn’t seen before.

And that is a good metaphor for the whole visit, really. Shanghai is so huge (23 million people) and China is even huger, and the tiny little 625-square-kilometre sample that I saw scarcely scratches at the surface – it’s like looking at the moon of someone’s pinkie fingernail and counting that as meeting the person whose hand it is part of. YOU HAVEN’T EVEN SEEN THE WHOLE FINGERNAIL.

So – many, many thanks to Jennifer Chapman, and to the Concordia International School and the wonderful students and faculty there – you made me so welcome and shared such a busy, exciting week with me!

When Jennifer dropped me off at the airport, we realized we didn’t have a picture of the two of us together! So we took a selfie. XD 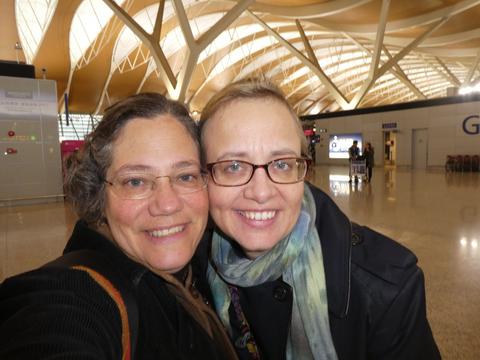 Tourist tip: Fancy chopsticks make the BEST souvenir present ever. Back in Scotland, they are exotic and unusual and thoughtful, and they are really easy to pack. 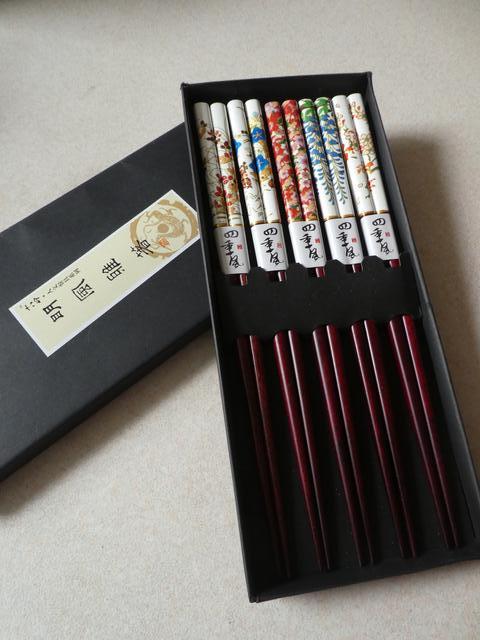